This section explains how to select text with Vem in order to copy, cut, delete or perform any other action over it. 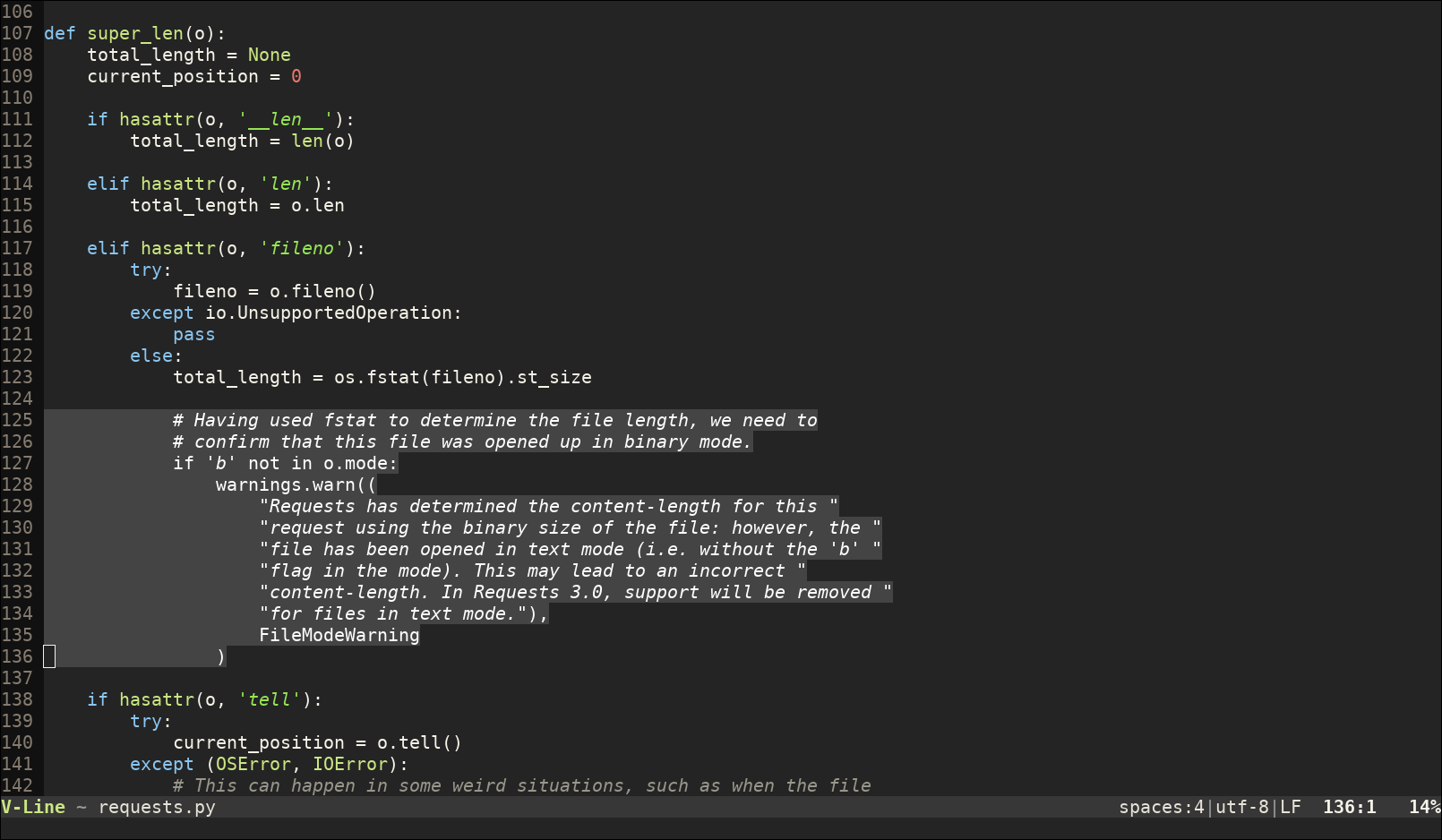 Once you select text, the editor enters visual mode, the selected text is highlighted and the new mode name is shown on the statusline. In this mode, many keyboard commands are the same as in normal mode —for example, all movements— but some other change so they operate over the entire selection.

There are three kinds of selections that you can define:

This is the most common type of selection among other editors. It consists in a selection that goes between two arbitrary characters in the text:

To create a selection of this type, press G and perform any movement to the left or the right (it can be any command as long as it is sideways):

In a linewise selection, entire lines are always selected independently of the position of the cursor:

To create a selection of this kind, press G and then perform any movement up or down with the cursor:

This kind of selection is very convenient when working with code since it allows you to operate over entire blocks very quickly.

The final type of selection is blockwise. With this one, you can define an arbitrary rectangle in the screen that you can copy/cut, delete or modify:

To start a blockwise selection press:

And then move the cursor to place the opposite corner of the defined rectangle.

There's a peculiarity about blockwise selections: not only can you operate with the text under the selection, but also you can append text to either side of the rectangle.

append text to the left of the selection

append text to the right of the selection

For example, if you have:

Once you have a selection defined, you can discard it with switching back to normal mode with Ctrl-o or with:

And if there's no selection defined, you can bring back the last active selection with:

While you can select any arbitrary area just using movement commands, in practice it is much more common to use actions that allow to perform quick selections over text objects.

For example, if the cursor is over the s of string_network:

Then, you can perform the following actions:

Selecting between a pair of surrounding characters is extremely useful when coding.

If you press Ctrl-g repeatedly, you get successively larger selections (first by including the enclosing characters and then by considering any outer enclosing scope):

Other quick selections are:

There are longer key sequences that allow you to select even more text objects. Each sequence consists of three key presses:

The letter can be:

line (not including preceding or trailing white-space)

selects the sentence under the cursor including trailing whitespace.

selects between two HTML/XML tags including the tags themselves.